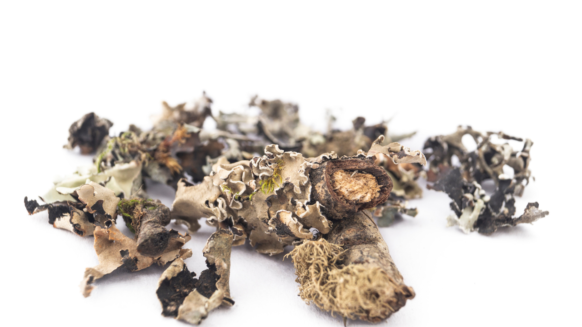 The Black Stone Flower with the botanical name Parmotrema Perlatum belongs to the genus Foliose lichen. Lichen is a classified species between fungi and photosynthetic partners, and very rarely they include algae.

They thrive as invasive plants throughout the southern and northern hemispheres of the earth with moderate temperatures. The black stone flower with the Sanskrit word “Shaileyam” is used as a spice in various parts of the world, including India.

These fungi are known by many names like Dagad Phool, Patthar Ke Phool, Kallu Hoovu, Raathi Pootha. The soft brown and black lichen, widely known in Tamil as Kalpaasi (கல்பாசி), can only grow in a certain altitude above sea level or have the characteristics of expecting very low temperatures.

The fungus that grows on rocks, stones, and trees is recognized as one of the most unusual spices in Indian review. A rare type of flower that is admired by all, it does not have a distinctive scent although it does provide a mild soil and woody scent depending on the growing environment.

These fungi, which are widely used in India, are found in large numbers in the Ooty and Kodaikanal hills of Tamil Nadu, where they have a very light fluffy texture.

Black Stone Flower or Kalpasi, which has intense properties and unique traits than any other spice used in the world and is compatible with all types of food, and still dominates all traditional Chettinad products.

In addition, this edible lichen is also widely used in Hyderabad and Marathi cuisine. As already mentioned these black-purple flowers do not have their own flavor although they add a mysterious flavor to whatever food they are added to.

Black Stone Flower powder contributes as a part of the famous Goda Masala of Maharashtra and is also widely believed to be a part of the traditional Garam Masala.

They are also involved in the production of Potli masala in Lucknow. To get the full aroma of the stone flower, you need to fry it in a little oil before use.

They are used not only in vegetarian dishes but also in non-vegetarian dishes like Goat meat stews, Bombay biryani, nahari (Paaya). These give a traditional taste and aroma to all dishes prepared using vegetables, fish, meat, etc.

The airways become inflamed due to certain respiratory ailments and external factors, resulting in narrowing of the airways, creating more mucus in the area. When this condition develops it is difficult to breathe, which is called asthma, and the effect of asthma may be minimal, or in some cases lead to a life-threatening attack.

Symptoms of asthma include cough, shortness of breath, and chest pain. Black Stone Flower helps to keep the airways open at all times to control such symptoms and asthma.

In addition, they actively carry out the task of neutralizing the main doshas known as Vata and Kapha. Stone Flower removes blockages and obstructions in the airways and leads to ventilated lungs, making it easier for asthma patients to feel complete breathing.

Ayurveda recommends Black Stone Flower as an important herb for asthma management due to its Kapha-Vata balance properties. These fungal flowers can be used as a spice, as usual, to get relief from the symptoms of asthma.

Calcium crystals deposited in the bladder and urethra tube transform into strong stones over time and clog the urethra, causing various infections. A sort of Lichen, also known as Black Stone Flower, acts as a diuretic and stimulates the production of urine, which removes stagnant calcium with increased urination.

In Ayurveda, Black Stone Flower is used to treat various kidney conditions including kidney stones. The formation of hard stone, known as Urolithiasis in medical terms, and Mutrashmari (renal calculi) in Ayurveda terms, can control many important functions of the body and cause adverse effects.

Such renal calculi that form in the renal system can also be caused by an excessive amount of Vata-Kapha origin. Black Stone Flower has antilithiatic properties and it acts as a lithotriptic which greatly prevents the formation of kidney stones.

In addition, they help flush out calcium crystals and excess urine by balancing Kapha doshas. Regular intake of Black Stone Flower decoction can destroy the stones formed in the kidney. To make decoction first you should finely grind the Stone Flower and mix it with 2 cups of water then boil for about 10 to 15 minutes.

The mixture should be filtered when it decreases a quarter of its original volume. Consume it 2 times a day at a rate of 10-15 ml for 15 consecutive days to dissolve kidney stones.

The extract obtained from Black Stone Flower fungi has anthelmintic properties, which kill and expel harmful parasitic worms and other internal parasites in the gut. This prevents the development of kidney-related diseases and various symptoms.

In a study conducted on Black Stone Flower, its extract was given as medicine to patients with kidney disease. At the end of the study, it was demonstrated that this fungus extract increased the pH level of the participants and the production of urine.

In another similar study, it is shown to contribute to the optimal removal of creatinine, a waste product caused by a collision of creatine. Besides, these excrete excess uric acid and provide a positive effect on kidney function.

The Black Stone Flower powder acts as an excellent pain reliever and provides excellent relief in a short time. That is why these are widely recommended in Ayurveda to reduce pain.

Kalpasi contains antimicrobial properties and some phytoplankton chemicals that are effective in eradicating bacteria that can cause skin infections.

Helicobacter pylori, a bacterium that can live in the digestive tract, causes bloating and ulcers in the stomach, which can lead to gastritis. The antimicrobial activity found in Black Stone Flower helps to inhibit and destroy H. pylori growth.

Through this process, it is possible to treat chronic gastritis, digestive disorders, etc. in a positive way. Acids play a major role in the proper digestion of food molecules and their conversion into energy molecules.

The gastric glands in the stomach produce an essential acid called hydrochloric which contributes to the digestive process. When the amount of acid produced by the parietal cells is too high it leads to a condition called acidity.

Excess acid secretion can cause inflammation and ulcers in the inner lining of the stomach, which can lead to gastritis when this condition persists.

Black Stone Flower is used in Ayurveda and Siddha medicine to treat gastritis. Due to the Kashaya (astringent) and Sita (cold) properties of these fungi, gastritis and related symptoms can be cured.

These edible fungi have antibacterial, antiviral, and anti-inflammatory properties that treat various skin problems such as wounds, cracks, cuts, inflammation, and tumors.

The astringent properties in Black Stone Flower help speed up the wound healing process and control itching and pain. Its powder is taken continuously as a medicine to reduce body heat and maintain constant body temperature.

Applying the powder of these fungicides to wounds and bleeding will stop the bleeding instantly and speed up the healing process. Thus wounds heal easily without septic.

Black Stone Flower significantly lowers blood sugar and glucose levels by regulating the enzyme Sucrase and Isomaltase, which are involved in the process of glucose absorption in the body.

This rare type of fungus has the ability to effectively manage diabetes through this beneficial process. An abnormal condition called acute pancreatitis is caused by free radicals attack, gallstones, and continuous alcohol intake.

The phenols contained in Black Stone Flower, and the action of antioxidants called flavonoids, protect the pancreatic cells. They also play an important role in neutralizing free radicals.

Improper digestion produces a toxin called AMA in pancreatic cells, which can have a number of adverse effects, including impaired digestion and impaired insulin function.

Due to the Kapha balancing and Tikta (bitter) properties of Black Stone Flower, the formation of ama toxin is prevented, and digestion is promoted appropriately. In addition, it lowers blood sugar and maintains insulin function.

Arthritis is mostly caused by old age, pain, stiffness, and loss of mobility in sufferers. Excess fat and triglyceride levels are also a major cause of arthritis.

Ayurvedic claims that the high anti-inflammatory properties of Black Stone Flower are used to treat arthritis. Besides, these have the ability to reduce chronic inflammation and joint pain associated with arthritis.

In some people, arthritis can be caused by the severity of the Vata dosha. The resulting rheumatism causes dryness, pain, and inflammation in the bones and joints. The Snigdha (oily) properties of these fungi can significantly control gout and help control the symptoms related to them.

Urinary tract infections (UTIs) are painful conditions that affect the parts of the urinary system (such as the urethra, kidneys, ureters, and bladder). This condition is caused by harmful bacteria, viruses, and fungi. People with UTIs experience painful urination and low urine output.

10. Aids in the Liver Health

Various factors such as side effects of prescribed medications, excessive fat accumulation in the liver, and persistent high alcohol consumption are the leading cause of liver-related disease.

If liver damage is untreated, it can lead to liver failure and even death. Hepatoprotection, the direct opposite of hepatotoxicity, is a chemical found in certain herbaceous plants that has the potential to manage the liver disease.

Hepatoprotection, also known as Anti Hepatotoxicity, is high in Black Stone Flower, so people with liver disease can protect their liver cells by ingesting the powder of this fungus.

In the present era of medical development, various modern methods are placed as options among women when determining the decision of contraceptives for various reasons. But they all have the potential to cause specific side effects.

One of the wonders of nature, the Black Stone Flower herb has anti-fertility properties without any side effects. If men intake the powder of Black Stone Flower, it reduces their sperm density and motility temporarily. In addition, women ingest it to prevent sperm from entering the eggs (ova).

That is, Black Stone Flower does not form a fetus even when engaged in a sexual relationship. Although it is recommended by most experts as an herbal contraceptive, proper medical prescription and guidance are essential.

The most important symptoms of Yellow Fever are jaundice, nausea, fatigue, fever, muscle aches, headache, and vomiting. The antiviral activity of Black Stone Flower helps to effectively manage Yellow Fever and its symptoms.

Black Stone Flower helps to prevent the growth, spread, and transformation of the virus that causes yellow fever. In addition, these fungi have a natural relief from body aches due to their antipyretic properties

Kalpasi is effective in lowering triglycerides, total cholesterol, and low-density lipoprotein (LDL cholesterol) because they all cause various diseases and disorders, including heart disease.

Therefore, adding Black Stone Flower powder as a spice to the diet of obese people will greatly stimulate the weight loss process. This aside, the fungus also plays a significant role in increasing the high-density lipoprotein (also known as HDL fat or good cholesterol) that provides energy to the body.

Besides, the study results show that these have high antioxidant properties, and because of their high phenolic content they can reduce bad LDL cholesterol and increase good HDL cholesterol.