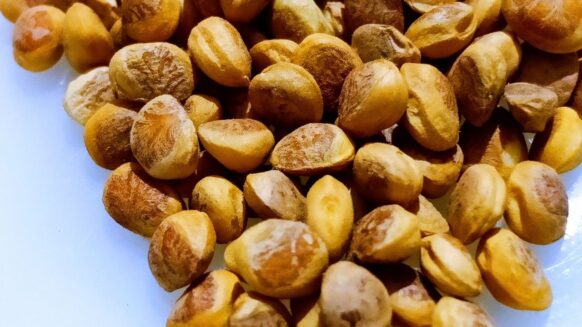 Charoli is the name for the seeds of the Buchanania lanzan plant. The seeds are also commonly known as chironji seeds or almond toes. The Buchanania lanzan plant grows wild in forests all over India. Charoli is commonly identified with food from the state of Maharashtra, which spans western and central India. The seeds are harvested by the state’s tribal population, for whom they are a source of income.

Charoli can be used whole and is often eaten like a nut. Its flavor is the same sweet and nutty flavor that is common to almonds, pistachios, and hazelnuts. When heated, the flavor intensifies and it can take on a mild bitterness and a flavor that has been likened to the flavor of nutmeg. That mild bitterness also makes it useful as a savory spice.

The most common use of charoli in India is as a topping for desserts like halwa and a yogurt dessert called shrikhand that includes it along with cardamom and sugar. It is also used in a drink similar to eggnog called Piyush.

Charoli contains a range of health-improving compounds, such as:

The oil in charoli seeds is believed to be effective for making bowel movements more regular and can help to make stool more solid for remedying diarrhea. Charoli is also effective for treating ulcers, both in the intestines and in the mouth.

Charoli seeds are said to have aphrodisiac properties and are able to restore libido.

Because they are rich in protein and do contain some fiber, charoli seeds are able to increase the feeling of fullness and may thus help to prevent overeating. As a result, a person will eat fewer calories and lose weight.

Charoli is often used as a tonic and can help to boost energy to prevent fatigue.