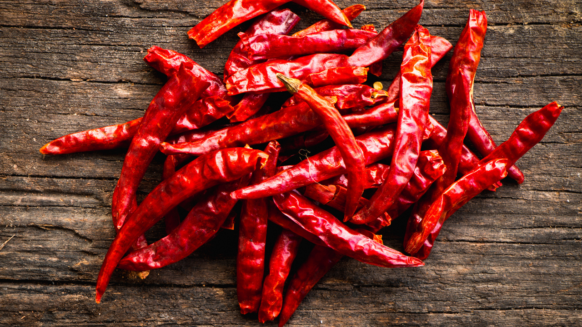 Whenever we talk about Indian cuisine, the first thought that pops up in our minds is the heat in it. And that’s nothing but the kick of chilies. Indian foods are incomplete without chilies in their spices. But did you know India has almost ten types of chilies spread all across the states?! Other than adding an extra zing to our taste buds, chilies have some amazing health benefits. They benefit the digestive tracts, promote a healthy heart, relieve joint pains, promote weight loss, mitigate migraine, reduce cancer risk, prevent allergies.

Chilies, also known as mirch in India, were believed to be brought to Asia by Portuguese navigators during the 16th Century. These came to India with Vasco-Da-Gama and became very popular. Chilies are not only used in Indian food, but also in Ayurveda.

Also known as ‘ghost pepper’, Bhut Jolokia is certified as the hottest chilly in the world in the Guinness Book in 2007. It is an interspecific hybrid (of Capsicum Chinese and Capsicum frutescens) chili pepper cultivated in the North-Eastern states of Arunachal Pradesh, Assam, Nagaland, and Manipur. Bhut jolokia is used as a food and a spice, popularly in combination with pork or dried or fermented fish.

As the name suggests, this chili is found in Kashmir and is the most sought-after red chili in India for its color. An Indian kitchen is incomplete without Kashmiri Mirch powder as this adds color to the mouth-watering dishes every household cooks. This chilly is less hot or pungent, as compared to the other variants found in India.

Andhra Pradesh is known for its spicy dishes and the credit goes to Guntur chilies, from the Guntur district of the state. Guntur is the main producer and exporter of most varieties of chilies and chili powder from India to countries like Sri Lanka, Bangladesh, the Middle East, South Korea, the UK, the USA, and Latin America. Guntur Sannam, one of the types of Guntur chilly, is also cultivated in Madhya Pradesh.

This chili, also known as finger hot pepper, is primarily grown in Kheda, Mehsana, and southern parts of Gujarat. Although it’s green initially, once it matures it turns red in color. They can even be grown at home. This chili is easily available in the market throughout the year and very pungent in flavor.

This chili is grown in Kerala and some parts of Tamil Nadu. It is also known as bird’s eye chili of Kerala and becomes white when matures. It adds heat and lends good flavor to dishes.

It is a famous variety of chili, mainly grown in Karnataka. It is named after the town of Bydagi, which is located in the Haveri district of Karnataka. Known for its color and pungency, byadagi chili is similar to paprika.

Almost spherical in shape, this chili has very shiny skin and is orange-red in color, grown in the Ramnad district of Tamil Nadu. This chilly is particularly used to add flavor to the Chettinad cuisine.

This chili is grown in Manipur and is easily available in Kolkata. Known for its strong pungent smell and heat, it is blood red in color.

Fish Biryani is a flavorful mix of rice, spices and fish. Do try this simple and easy to make this authentic...