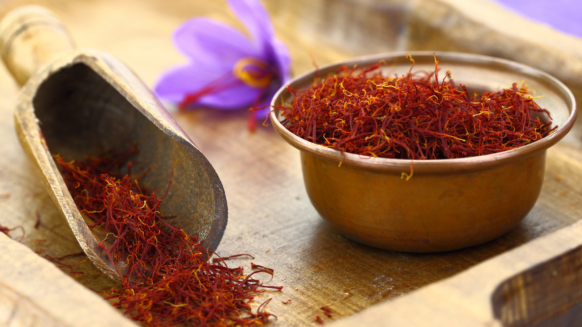 The reason for its hefty price is its labor-intensive harvesting method, making the production costly.

Saffron is harvested by hand from the Crocus sativus flower, commonly known as the “saffron crocus.” The term “saffron” applies to the flower’s thread-like structures or stigma.

It originated in Greece, where it was revered for its medicinal properties. People would eat saffron to enhance libido, boost mood, and improve memory

Saffron contains an impressive variety of plant compounds that act as antioxidants — molecules that protect your cells against free radicals and oxidative stress.

Safranal gives saffron its distinct taste and aroma. Research shows that it may help improve your mood, memory, and learning ability, as well as protect your brain cells against oxidative stress.

Lastly, kaempferol is found in saffron flower petals. This compound has been linked to health benefits, such as reduced inflammation, anti-cancer properties, and antidepressant activity.

Saffron is nicknamed the “sunshine spice.”

That’s not just due to its distinct color, but also because it may help brighten your mood.

In a review of five studies, saffron supplements were significantly more effective than placebos at treating symptoms of mild-to-moderate depression.

Other studies found that taking 30 mg of saffron daily was just as effective as Fluoxetine, Imipramine, and Citalopram — conventional treatments for depression. Additionally, fewer people experienced side effects from saffron compared to other treatments.

What’s more, both the saffron petals and thread-like stigma appear to be effective against mild-to-moderate depression.

While these findings are promising, longer human studies with more participants are needed before saffron can be recommended as a treatment for depression.

Saffron is high in antioxidants, which help neutralize harmful free radicals. Free radical damage has been linked to chronic diseases, such as cancer.

In test-tube studies, saffron and its compounds have been shown to selectively kill colon cancer cells or suppress their growth, while leaving normal cells unharmed.

While these findings from test-tube studies are promising, the anticancer effects of saffron are poorly studied in humans, and more research is needed.

Premenstrual syndrome (PMS) is a term that describes physical, emotional, and psychological symptoms occurring before the start of a menstrual period.

In women, 20–45 years of age, taking 30 mg of saffron daily was more effective than a placebo at treating PMS symptoms, such as irritability,  headaches, cravings, and pain.

Another study found that simply smelling saffron for 20 minutes helped reduce PMS symptoms like anxiety and lowered levels of the stress hormone cortisol.

5. May Acts as an Aphrodisiacs

Aphrodisiacs are foods or supplements that help boost your libido.

Studies have shown that saffron may have aphrodisiac properties  — especially in people taking antidepressants.

In women with low sexual desire due to taking antidepressants, 30 mg of saffron daily over four weeks reduced sex-related pain and increased sexual desire and lubrication, compared to a placebo.

Snacking is a common habit that may put you at risk of gaining unwanted weight.

According to research, saffron may help prevent snacking by curbing your appetite.

However, scientists are unsure how saffron curbs appetite and aids weight loss. One theory is that saffron elevates your mood, which in turn reduces your desire to snack.

Saffron has many different chemical components. Some of these may help to reduce blood pressure and provide protection against heart disease.

A  review trusted Source of studies done on rats showed that saffron lowered blood pressure. Other research using rabbits found the spice to be effective in lowering cholesterol and triglyceride levels.

One older human study in the  Indian Journal of Medical SciencesTrusted Source found that saffron reduced the possibility that bad cholesterol would cause tissue damage. Researchers believe that the antioxidant properties of saffron might have a protective effect when it comes to heart disease.

Saffron contains two chemicals, crocin, and crocetin, which researchers believe may help learning and memory function. One study trusted Source published in Phytotherapy Research using mice found that saffron was able to improve learning and memory problems. This promising research shows that saffron may have potential in treating diseases that affect the brain, like Alzheimer’s and Parkinson’s.